Invention of the elevator 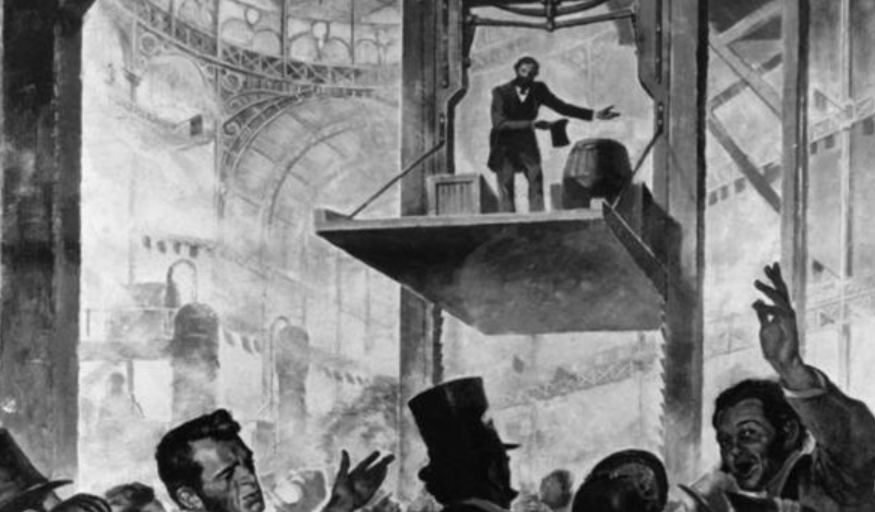 Invention of the elevator

Definition of the invention

An elevator is defined as a platform in a shaft that is used for lowering or raising things or people to different levels or floors. The shaft has accessories, motor cables and operating equipment (Bellis, 2015, para. 1). The current architecture has not only raised the use and need for elevators but something that has existed since the times of civilization. During the 3rd century, what was used for lifting was hoists that were operated by animals, humans and water wheels and this continued until the industrial revolution. This continued until one day a man by the name Archimedes came up with a new lifting device that was highly improved compared to what was used previously (Verma, 2016, para. 1). This particular device used ropes and pulleys which had been coiled around winding drums for their efficiency. To ride this elevator, gladiators and wild animals were used. The first modern elevator that was specifically designed to lift passengers was made in the year 1743 specifically for King Louis of France (Verma, 2016, para. 2). While this cannot be compared to any of the current elevators, it was the beginning of a new era of innovations to improve on what was referred to as the flying chair. This particular elevator was operated manually after the command of the King, and he would use it to move from one floor to the next.  This existed until around 1850 when a new sophisticated elevator was designed. This was the steam and hydraulic elevator (Verma, 2016, para. 3).

However, two years later, one of the landmark events that changed the invention of the elevators happened when Elisha Graves Otis invented the first safety elevator (Schumm, 2014, para. 3). In the year 1957, Otis installed the first ever passenger elevator. Otis was motivated to have a more mechanical elevator because of the need to hoist building materials that were hefty when he wanted to convert a sawmill into a factory (Schumm, 2014, para. 3). While Otis is not given credit for the invention of the elevator, his invention of the safety break revolutionized the industry of vertical transport. Before his death, Otis had established an elevator company that until today is recognized globally as the largest manufacturer of elevators (Bernard, 2014, p. 1-13). After these developments, numerous innovations followed to make the lifts used today. However, even before Otis would set up the first public elevator that was steam powered, there were critical changes that had been made prior and he incorporated them to make this new invention.  Below, the various changes that were crucial in making the elevator invention have been provided in detail.

Definition of the innovation

The change made by Otis received the patent for in the year 1861. This change was critical in eliminating elevator falls. This innovation had loaded springs which had an automation that had the capability of pressing hooks that looked downwards into metal teeth that faced upward. It was structured to happen upon release of tension on the rope. Otis had made demonstrations in 1854 when he was on the platform. The sales increase tremendously. The most important aspect of this innovation was that climbing of many stairs was avoided sparking a new wave of tall buildings across cities. Eventually, a new era for passenger elevators usage was ushered in as well as a new start for designing modern cities  (Hurst, 2013, para. 3 ).

The innovation of electrically operated elevators was critical in the invention of the modern elevator. Siemens invented how an electric motor would be incorporated in an elevator, but this innovation did not widespread until the 20th century.  When electricity became reliable concerning power source the change was accepted by many people (Hurst, 2013, para. 5).

The change of automatic doors proved to be a game changer towards developing a safer elevator. The development of elevator in the United States has always been based on safety.  In 1944, the innovation was patented. This was a sensitive door bumper which would automatically make the elevator door stop when it hit any obstruction such as a limb of the passenger. This innovation was the beginning of a new revolution of safety doors as elevator companies started innovating new creative methods. For instance, a change regarding ultrasound and infrared sensors began to be incorporated in elevators as a way of improving safety (Hurst, 2013, para. 6).

Sky lobbies are not part of an elevator, and no one claims a patent on it, but the innovation was significant in the history of the elevator. This change was critical in that it helped cities to build super tall buildings that did not exist. These lobbies are used in such a way that passengers who are going to upper floors use the high-speed elevators into a staging floor and from here they are transferred to another elevator to reach the upper floors. While sometimes it can be referred or seen as a hassle, it used passenger flow models that are very sophisticated. It is a more efficient method that is used to service buildings rather than having elevators to get to every floor. This innovation complements the elevator making it easier and convenient for the passengers (Kwok, Grondzik, Reynolds, & Stein, 2013, p. 1453).

This innovation works like sky lobbies having been designed to ensure that human flow is optimized.  This change stacks two cars on each other where one is for the odd floors and the second one is on the even floors. With this kind of innovation, elevators can carry many people without their overall foot print being added. Because of this, there is a reduction in the un-rentable core space which is often dedicated to systems such as elevators and utilities. The innovation made size buildings to be viable (Kwok, Grondzik, Reynolds, & Stein, 2013, p. 1454).

Compass destination is the most recent innovation that drives the invention of the elevator. Through a compass, elevators have a new interface that allows passengers to select the floor that they intend to visit before stepping into the elevator. When more than one passenger makes the selection, the system in the elevator makes an evaluation of all the requests and selects one elevator that best suits each rider and provides them with the direction to where it is. Also, this innovation allows the elevator to be more efficient in the servicing of travelers when going to their preferred destinations. When compared to the convention system this change is approximately 30 percent faster (Hurst, 2013).

Finally, the regenerative drive was an innovation introduced in 2005, but the concept existed more than ten decades prior. In this change, the energy that is developed is utilized in supplementing the electric power in the circuits of the elevator. This innovation works when brakes are applied to a hybrid car regularly when the elevator is descending.  Every time the elevator descends the available kinetic energy is used in the generation of electrical energy which is in turn released to the grid of the building (Parker,& Wood, 2013, p. 159).

Historical signiﬁcance of the elevator

The invention of the elevator was and is a product of many anonymous mechanics that employed creative thoughts and efforts after getting inspiration from the iron-wire cable that was developed in 1834. Their collective success has been critical in the construction of tall residential and commercial buildings especially in American cities such as Chicago and New York. Installation of elevators raised many safety concerns, but through the above-named innovations such as sliding doors, safety was enhanced. The increase in changes surrounding elevators increased the need for these elevators eliminating the need for centralized staircases that were being installed previously in tall buildings. The many innovations in the invention of the elevators transformed stairways to be only escape routes. Historically, the invention of elevators was significant in opening up cities as tall buildings started to be designed as a movement of passengers became efficient and convenient (Bigott, 2015, p. 637).

Benefits and shortcomings of the elevator

The benefits of having an elevator include increasing efficiency and effectiveness for the users when going to their destinations. Moreover, elevators helped in the expansion of cities and towns as new tall buildings started emerging. This made more space available to set up numerous buildings. Other benefits included the increase in speed regardless of the weight and a decrease in installation and maintenance costs. This was possible because of the numerous innovations.  On the other hand, the shortcomings include expensive to acquire elevators and the safety concerns.

Quality Custom Writers has assembled a team of highly skilled writers with diverse experience in the online writing circles. Our aim is to become a one stop shop for all your Academic/ online writing. Check out below our amazing service!

At Quality Custom Writers, we prioritize on all aspects that creates a good grade such as impeccable grammar, proper structure, zero-plagiarism, and conformance to guidelines. The principal purpose of essay writing is to present the author's evaluation concerning a singular subject about which they have made. Since Professionalism is the mother of every success, try our team of experienced writers in helping you complete your essays and other assignments.

You have been trying to join that prestigious institution you long yearned for, but the hurdle of an admission essay has become a stumbling block. We have your back, with our proven team that has gained invaluable experience over time, your chance of joining that institution is now! Just let us work on that essay.How do you write an admission essay? How do you begin the essay? For answers, try Quality Custom Writers Now!

Regardless of whether you're pleased with your composing abilities, it's never an impractical notion to have a second eye go through your work. The best editing services leaves no mistake untouched. We recognize the stuff needed to polish up a writing; as a component of our editing and proofreading, we'll change and refine your write up to guarantee it's amazing, and blunder free. Our group of expert editors will examine your work, giving an impeccable touch of English while ensuring your punctuation and sentence structures are top-notch.

We pride ourselves in having a team of clinical writers. The stringent and rigorous vetting process ensures that only the best persons for job. We hire qualified PhD and MA writers only. We equally offer our team of writers bonuses and incentives to motivate their working spirit in terms of delivering original, unique, and informative content. They are our resources drawn from diverse fields. Therefore your technical paper is in the right hands. Every paper is assessed and only the writers with the technical know-how in that field get to work on it.

If all along you have been looking for a trustworthy college essay service provider that provides superb academic papers at reasonable prices, then be glad that you search has ended with us. We are your best choice! Get high-quality college essay writing from our magnificent team of knowledgeable and dedicated writers right now!

We give the students premium quality assignments, without alarming them with plagiarism and referencing issues. We ensure that the assignments stick to the rules given by the tutors. We are specific about the deadlines you give us. We assure you that you will get your papers well in advance, knowing that you will review and return it if there are any changes, which should be incorporated.